I'm back with my series on photo tips for beginners. In previous posts I've talked about blurry photos and focus, and today I'll talk about flash settings.
*Repeat disclaimer: I am a photo novice with only a point and shoot to my name. Someone gave me a compliment on my photos so I decided to be audacious enough to share what I've learned about taking better pictures. If you are an expert, you will laugh at my basic advice. But if you are an average person you might find it useful!*
First I have to apologize that none of the pictures in this post are from outdoor adventures. But there is a good reason for that! When taking pictures in the natural, daytime light of the outdoors you rarely need to deviate from your camera's automatic flash settings. Good news, right?

So here is a gratuitous outdoor shot that has nothing to do with flash settings. 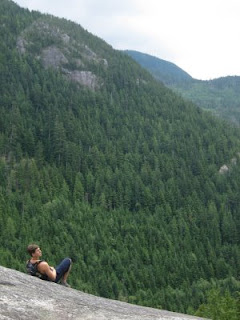 Mountain Man taking a break part way up the Chief in Squamish, BC
Flash Range
Have you ever been at a concert and seen people trying to take flash photographs of the stage with their point and shoot? Unless these people were in the first couple of rows, I'll bet that their picture turned out poorly.
That's because of the flash range. On your average point and shoot the range of the flash is minimal - only about 20 feet (check your manual for your specific flash's range). If the subject you are trying to illuminate is outside of the range the flash isn't doing you any good.
Suppressing the Flash
In the example above having the flash on is not only doing no good. In fact, it might actually be doing your picture harm.
Why would this do the picture harm? Because when the flash is on your camera's automatic settings choose a faster shutter speed. I wont get into the details (because I only have a foggy understanding of them myself) but essentially what that means is that the shutter is open for a shorter amount of time and that it lets less light in.

Normally that's good - if you're illuminating your subject with the flash you don't want to let too much light in or the photo will be all washed out. But if the flash is doing nothing to illuminate your subject (i.e. if your subject is outside of the flash range) letting less light in is bad.
The fix? Turn off your flash. On most cameras you do this by finding a symbol that looks like a lightning bolt and pressing it until a no-lightning bolt (bolt in a circle with a strike though) appears. Check your manual for the specifics for your camera.
The other time you might want to suppress the flash is when it is just plain ruining your picture. The flash on a point and shoot camera is less than ideal. It is situated centemeters away from the lens and falls directly onto your subject which often results in harsh lighting. But since we're just your average point and shooters here (and not professional photographers with separate flashes and light umbrellas) we've got to make do with what we have. A few times that the flash might ruin your picture are
The quick fixes for these situations are to turn off your flash and/or move to somewhere that has better lighting. Natural light is pretty much considered the best, so open the curtains or step outside. 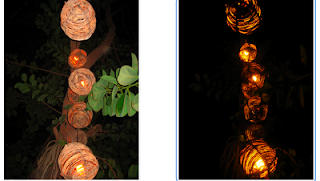 When I took my first shot of these hanging lanterns in Mexico (left) the flash ruined the natural lighting that I liked so much. By simply turning off the flash I was able to capture the picture on the left that showed the lanterns as the eye saw them.

While I'll admit that neither of these are great pictures, you can see in the shot on the left (flash on) that the detail from the white flowers disappeared (click to enlarge). By turning the flash off (right) you can see the detail again. I probably would have been better off moving outside to get a shot that had fewer distracting shadows.
One caution for turnign off the flash: when your shutter speed is slower your camera is more suseptible to shake. So make sure to hold it steady and you'll be set to go.

This is my FAVORITE special mode on my camera and probably the only one that I use all the time (as I said in my first post, automatic gets the job done right most of the time). It's not exactly a flash mode but to me it kind of fits in the category so I'm covering it anyway.

Have you ever tried to capture of a photograph of city lights only to be disappointed? What you need is the Night Snapshot mode. The idea with this mode is that it sets a super slow shutter speed. This lets in lots of light which means that more background light makes it into your picture.

This mode is useful for city lights, sunsets, fireworks (if you like the streaky look), and even stars. 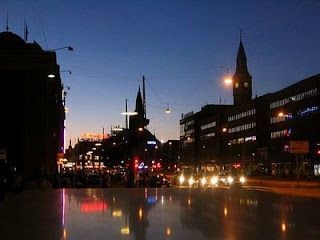 Beautiful downtown Copenhagen.
On my camera it's called Night Snapshot and the symbol looks like a little person in front of a moon and the Eiffel Tower. Your camera might be different so consult your manual.

When you use the night snapshot mode you have to be super careful of camera shake. But in certain situations you can use that to your advantage to create an interesting effect. 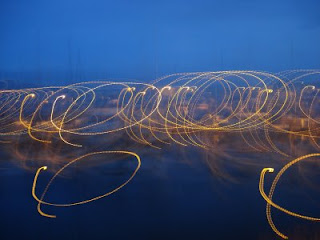 The Bellingham Marina. I created this picture by moving the camera around in a circle while I took the shot. Kind of fun, right?

Play around with the night snapshot mode and I'll bet you'll find a ton of times to use it.

Also note that on many cameras you can still force the flash to be on or off (or leave it in auto mode) while using night snapshot. So You can get a picture of both the neon lights of Las Vegas and of your sweetheart standing in front of them.

Just like you sometimes want to suppress the flash, sometimes it's useful to force the flash to be on.

Have you ever tried to take a photo of someone in front of a bright background like a sunny sky? You may have had the experience of your subject coming out in silouette. Sometimes that's great, but other times it's no so desirable.

The solution? Turn the flash on! It seems weird I know. The conditions are bright yet you need to use the flash. But try it out! It's all part of that flash range thing we talked about earlier.

Prospect Point in Stanley Park, Vancouver, BC. The picture on the left has no flash, the picture on the right has flash.
Another time to force the flash is when a bright sunny day is casting shadows on your subject's face. This is a pretty common problem for people wearing sun hats.


Are you laughing yet at the simplicity of my tips yet? (I told you they are for beginners!) Then head on over to hear what someone who really knows what's up is talking about. Pioneer Woman has a great Photography blog (actually, all her blogs are pretty great) and creates free sets of actions for all your PhotoShop users. And if you are into real life romance stories you have to check out her Black Heals to Tractor Wheels serial.

Email ThisBlogThis!Share to TwitterShare to FacebookShare to Pinterest
Labels: Photography