How to be an Awesome Race Support Team*

*Team of one in my case.
I spent Sunday doing race support for Mountain Man and his buddy Iron Man as they completed in the Mountain to Sound (a five stage multisport race in the Seattle area). It was a crazy day completed with little to no preparation. We had so much fun and the men kicked butt and proved their athletic dominance once again.

Race support is a great way to join in with all the race fun and hoopla without having to break a sweat (well, hardly). Not only was it a total blast, but I got tons and tons of “thank yous” from Mountain Man and Iron Man who genuinely needed my help to pull off the logistically complicated adventure.

And since we planned absolutely nothing in advance, we learned lots. So learn from my mistakes. Below is a list of the items that I now consider essential for supporting a multisport race team. There may be a few ridiculous mishaps in there as well.

A camera. My camera was invaluable. I thought I’d just be taking pictures of my competitors throughout the race. No no my friend. My camera saved me when I failed to prepare in other areas. I didn’t bring a pen to write down times (this was a low tech race with no electronic chips) so I used my camera to snap pictures of the clock as my racers came though the transitions points. I also used my camera in various ways to deal with the fact that we didn’t bring DIRECTIONS. (I know what you’re saying. No directions?!?!?! See below.) 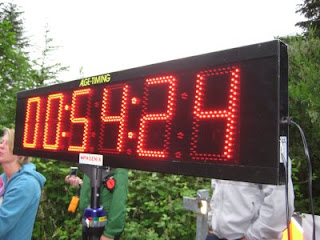 Directions. A five stage race means that we had to go to six different meeting spots. And we printed and brought directions to exactly zero of those spots thinking that they’d be provided in the race packet. Bad move. I ended up trolling for directions at every transition points – using my camera to take photos of other people’s directions (go Macro mode!) and even using it to record a video of someone giving me directions orally when no printed map was available. Thank goodness for friendly race folks. Bonus points for a GPS or an iPhone. 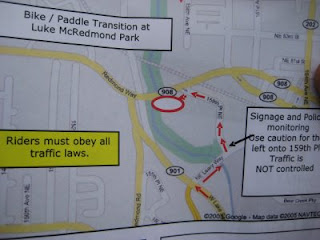 A watch. It’s vital to have everything prepared at your transition point before your racer comes through. There is nothing more important that you can do to help your racers achieve their best time than making their transitions fast. And to do that you have to be there before them! We may have had one tiny little 15 minute problem with this. I’m not saying it was my fault though. Iron Man is just too fast a cyclist!

Extra socks. Sometimes one of your competitors unexpectedly has to jump into a muddy river. Or ends up biking 50 miles in the rain. When you come up with the extra socks that he didn’t think to pack you’ll be his saviour. Especially if he’s about to run a half marathon in muddy wet socks.

Pockets. Make sure to wear an outfit with lots of pockets. Tons of them. Big ones. Everywhere! My pockets were stuffed with maps, race bibs, snacks, hand sanitizer, electronics, and anything else that someone needed me to keep track of. I suggest cargo pants. If you want to go really pro you could rock one of those fisherman’s vests. But maybe that’s taking things just a little too far.

Muscles. Lugging kayaks, bikes, and bins of gear all day is a mini workout in itself, especially when you’re trying to help your competitor’s save their strength.

Extra safety pins/zap straps/twist ties/tape. One thing that all multisport races seem to have in common is that they use lots and lots of race numbers. On the bike, on the helmet, on the kayak, on the life vest, and so on. We sent Mountain Man down the river without a number on his kayak because we didn’t have any tape. Oops! 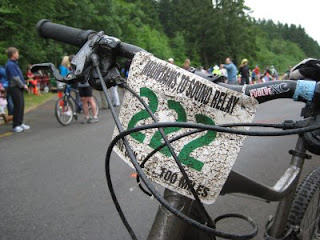 Pen. Do I even have to explain this? You always need a pen! Obviously I didn’t have one.

A bike lock and cable. When you’ve got two very pricey bikes on the back of your truck you will want to lock them up before leaving them unattended. We forgot this item and spent a lot of time unnecessarily loading and unloading (or conversely, leaving behind and worrying about) our bikes when they could have easily been locked to the hatch. 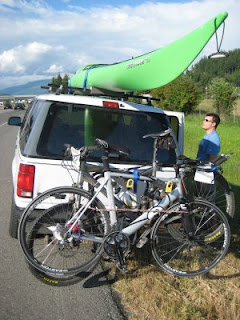 Food/water/water bottles. The race will probably have lots of this stuff provided but don’t depend on it. Have a variety of the racers’ favourite energy bars/beans/goos/drinks/real foods available as well as a big jug of water and extra water bottles in case they have to ditch some along the course.

Organizational Bins. You should have seen the car by the end of the race. It looked like REI exploded in there. No, that image isn’t right. The stuff at REI is all clean. It was like someone dumped an REI store into a muddy river then strained out all the clothes and gear and threw them into an SUV. And then squirt a bunch of extra sticky energy goo on top. The chocolate kind. And it smelt like it too. (Not like chocolate, like muddy river.) I can’t tell you what to do about the smell, but a little more pre-planned organization would have helped us make quicker and calmer transitions. Here’s my suggestion: before you leave for the race, put all gear and clothing needed for each transition into separate piles. Then put the contents of each pile into a separate bin/reusable shopping bag/duffel bag/whatever. Then label it. Then if you’re running late for a transition you won’t have to frantically dig through gear for 10 minutes. You can just grab your bin and run for it.

Noise Maker. The best part of doing race support is cheering on all the participants and taking part in the general happy ambiance! Many observers had fun noise makers (the cow bell was my personal fav) that added a lot to the festive atmosphere.

So there you have it. Follow these tips, bring a good attitude, and know how to parallel park a tank sized SUV with kayaks and bikes sticking off it from all angles and you’ll be captain of the race support team in no time!
Have you ever helped a friend out at a race? Or received valuable support from someone when you competed? Is there anything that I missed?

Anyone else love to go out to races just to soak up the energy?
Posted by CB at 5:24 PM

Email ThisBlogThis!Share to TwitterShare to FacebookShare to Pinterest
Labels: How To, Racing