As environmental consciousness sweeps through society transportation via human power is becoming increasingly popular. More people are biking to work, walking to the store, and skate boarding to school.

I've seen people tow a lot of stuff on bikes - Mountain Man has a Bob trailer that he routinely uses to transport his Costco buys. His buddy down California rigged his bike up to carry his surfboard. One time I swear I saw a Bellingham resident transporting a keg (hope you've got disc breaks buddy).

But have you ever seen someone tow a CANOE on their bike? Yup. I only wish I'd gotten a picture of this thing loaded up and in use. A picture of the trailer on it's own will have to suffice. 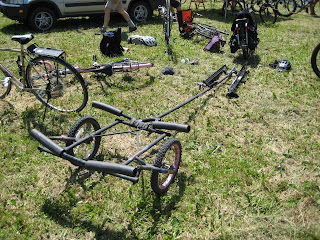 Mountain Man guessed that it was home engineered and was so fascinated that he took about a dozen pictures of different parts and components.
In true Bellingham fashion one Ski to Sea team decided to take more of a political stand rather than go for the gold - they competed CAR FREE!!! This is no small feat people. Firstly, the race begins on Mount Baker. That's more than 40 miles from Bellingahm and who knows how many feet in elevation. Secondly, a multitude of sports equipment needs to be towed including a canoe, kayak, extra bikes, and skis.

Talk about making me feel lazy for always driving to work! Geeze! This is a great reminder that using human powered transportation is a lot more viable than many of us like to think.

Do you use human power to get to work, run errands, or visit friends and family?
Posted by CB at 12:00 PM

Email ThisBlogThis!Share to TwitterShare to FacebookShare to Pinterest
Labels: Eco-love