I got the great idea in my head that I would do the 5K Yeti Snowshoe race on Mount Seymour last January. 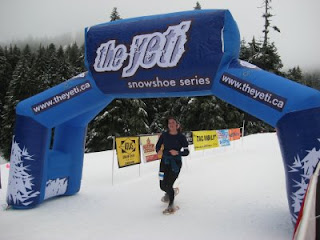 Unfortunately once I signed up I didn't train. At all.

But the show must go on! And honestly, I knew I wasn't going to train anyway. I guess you could say I knowingly signed myself up for a world of pain.

So I signed up for the 5K and Mountain Man signed up for the 10K. I didn't realize how fitting a choice this was until we showed up to the race and found the 5K to be 90% women while the 10K was predominantly men. Anyway, on to the pain.

Have you ever done a 5K? Not too bad right? Did that 5K involve ascending and descending gigantic hills? Hills that are challenging at a walking pace? Did it take place on snow? Snow is a heck of a lot of fun when you're not in a hurry. But when every step counts it's a little maddening how much of your energy gets absorbed by the soft surface. But anyway, we were lucky. It hadn't snowed in days so the trail was packed and pretty firm.

I started the race off at a fairly quick jog. I'll be honest, this was mostly out of peer pressure. I had every intention of jog-walking this trail but EVERYONE was running. So off I went.

After about 15 minutes I settled into a pattern of walking and jogging (read: walking and kind of flailing on the downhills). Essentially the whole race felt like burning pain. There was a lot of single track which makes it a little harder for serious racers. I however, was happy to keep people bottled up behind me as a chance to improve my standings. Just kidding.

The race ends on a huge downhill slope. Thank goodness. But I couldn't enjoy it because my snowshoe was teetering on the brink of failure about to slip off my toe and trip me down the mountain at any point. I made one or two hasty attempts to fix it but couldn't make any progress without actually taking it off and re-adjusting things. Too time consuming. Luckily the gamble worked out and I didn't end up tumbling across the finish line.

Lord that finish line was like my savior in the night (but at 11 am). The searing pain went away eventually and I got to say that I did it. And in less than the 2.5 hours I'd guesstimated. Well, maybe I was being pessimistic. I finished in 57 minutes.

Mountain Man ran the 10K. Of course he breezed across the line in 71 minutes. You read that right. MM finished twice my distance in only 14 more minutes. Speedy like a fox that one. The best part was that at the finish line he didn't even know he was done. It's a figure eight style track that was a little hard to figure out. Well really, it wasn't hard to figure out. He just didn't listen to the instructions. Listening isn't his strong point. Being speedy is though. So he still kicked butt.

From my extensive experience as a snowshoe racer I will now give you my tips on running a snowshoe race:
Have any of you ever made the choice to do a trip/race without training? How did that work out for you?
Posted by CB at 12:49 AM

Email ThisBlogThis!Share to TwitterShare to FacebookShare to Pinterest
Labels: Racing