Tips for buying a touring bike

Since I just bought myself a new touring bike, I thought I'd share what I learned. Here are my tips for buying a touring bike. 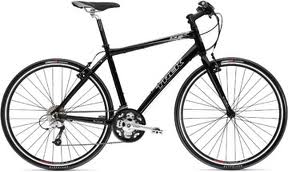 My bike is a Trek FX 7.3.  It's a hybrid/city bike and I love it.  A lot.  If anyone is looking for a bike with a more upright geometry to reduce lower back strain you should check it out.

Cost vs. Quality vs. Time

Pick two. Want a bike that's great quality and low cost? Then you'll have to put your time in searching Craigslist and Ebay and checking out lots of bike sales. Want to get your bike quick but still want to get an awesome bike? Then your gonna have to pony up some cash. Or want to get a cheap bike fast? Then count on getting what you pay for and get a cheaper bike.

Any of those options are fine, just try to think about what you want in advance. In the end I decided that I didn't have the energy or know-how to scour Craigslist every day so I went for the Quality and Time combo. I was looking for something that's somewhat unusual and I knew that I could be easily duped since I am no bike expert (then...why am I giving tips on buying bikes?...hmm...) so after a few weeks of half-heartedly looking for a deal online I sucked it up and bought the perfect bike that I had serendipitously happened upon at a bike shop.

In fact, I chose to buy from a shop that was charging a higher rate than one of the others I'd found! Crazy right? Well, crazy to a cheap-o like me. But in the end it was a difference of about $50 and I felt that it was the right choice to support the shop that provided me with fantastic customer service. And, bonus, it's more convenient for me to get to that shop should anything go wrong.

When it comes to the frame you basically have four options: aluminum, steel, titanium, or carbon fiber. When you are looking at a touring bike specifically, this is how it boils down.

Aluminum gets the job done. That's what my bike is made from. It's strong enough for a touring bike and it is the most inexpensive material.

Steal is ideal. It absorbs more road vibrations which helps reduce your fatigue and it's strong. It can also be welded by pretty much anyone (a good thing if your bike frame breaks, especially if you are in a developing country) while aluminum can't. It's a little more expensive than aluminum. This is what Mountain Man's touring bike is made from.

Titanium touring bikes are rare. Titanium is expensive and it's main purpose in bike making is to maximize their strength to weight ratio, which really doesn't make sense for a touring bike. When your loading your bike with heavy panniers, a few ounces saved on the frame don't mean much. Maybe you should part with that six pack of beer instead (umm...no).

Carbon fiber is NOT for touring bikes. Carbon fiber is for speedy road bikes. The material is very light weight and not strong enough for heavy loads. You wont find attachment points for racks on these frames - for good reason.

Check out this cool article if you want to know more about bike frame materials.

Frame Features
In order to make a bike useful for touring it needs to have two things:

Have you ever heard the old piece of backpacking wisdom that says "One pound on your feet is worth five on your back"? The idea is that since your feet are the part of your body you actually have to move dropping one pound from your boot weight is equal to dropping five pounds of your pack weight.

The same idea works for your touring bike. Instead of trying to set yourself up with a racy frame your better off getting a solid frame and a speedier set of wheels.

The general ideas to keep in mind here are:
Brakes

Disk breaks vs. V Brakes. The Great Debate! If your shopping experience was anything like mine you probably had sales people breathing the virtues of disk brakes down your neck (not at Kulshan though, thanks Zac!).

The deal is that disk brakes are more expensive, so shop owners would like you to buy them. Does this mean they are a bad product? No, of course not. But does it mean that you really need them? Maybe not. Let's look at how disk brakes hold up against the older fashioned V breaks.
So decide for yourself. There is certainly nothing wrong with disk brakes, but don't let the sales person convince you that they are essential.


Does anyone else have touring adventures planned for this spring? Are you using a bike meant for touring, a hybrid (like mine), a road bike, a cycle cross bike, a mountain bike, or something in between? What helpful hints have you picked up while setting up your rig?

*Yes, I realize that this is a ridiculous statement.
Posted by CB at 4:15 PM

Email ThisBlogThis!Share to TwitterShare to FacebookShare to Pinterest
Labels: Biking, How To